This week, my debut Collapsible: A Novel of Friendship, Broken Bones, Coffee, Shenanigans, and the Occasional Murder celebrates its first Bookiversary!

Last fall on September 29, 2017, this little gem was first released into the world. I couldn’t have been more vomitously excited.

Join me for a week of events marking this momentous occasion.

If you’ve been meaning to read Collapsible, or if it’s been a while and you want to brush up on the story before the week’s festivities begin in earnest, today’s your day. Grab a copy and get cracking.

Starting at 3:00pm (EST) and continuing through the evening, I’ll be reading through the novel and live-Tweeting thoughts, insider stories, and favorite lines. I haven’t read the book since final proofs last summer so this will be a treat for all of us. Be sure you’re following me on Twitter to join in.

Wednesday – Books in the Wild

I’ll be posting a thread on Facebook asking for pics of Collapsible going through the day with you. Show us Collapsible in its natural reading habitat! Pictures that earn the most likes will be featured later in the week.

Come with your questions and sassy comments about Collapsible, researching, writing, and whatever else you’d like. It’ll be an open forum. I’m ready! Be sure you’re following me there so you don’t miss out.

Here on the blog, I’ll be posting information about how you can access a hilarious deleted scene from Collapsible‘s cutting-room floor.

It’s one of my favorite scenes, but because it fell early in the book and didn’t sufficiently advance the plot, my editors suggested its removal before the final cut. Be sure you’re following this blog to learn how you can get it in front of your beady little eyes.

Keep your eyes peeled for surprise bonus content to drop through Instagram. Be sure you’re following me there to see it!

Happy Bookiversary, everyone! Settle in, brew a cup of coffee, and enjoy this dramatic reading from Chapter 1. (LOL, that close-up, though!) 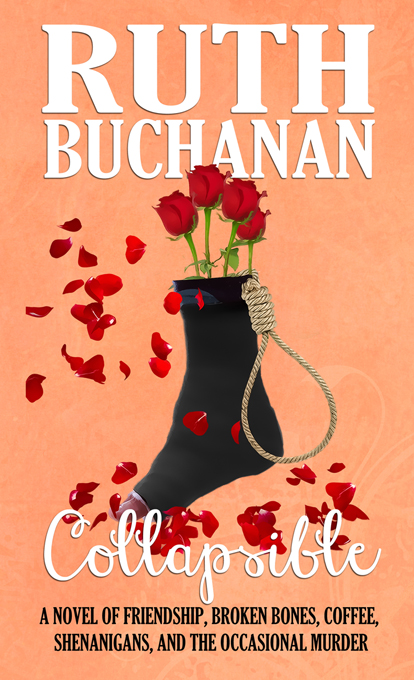